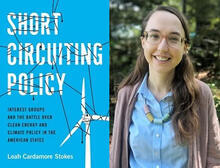 Leah C. Stokes, Assistant Professor of Political Science and an affiliate with the Bren School of Environmental Science & Management and the Environmental Studies Department at the University of California, Santa Barbara (UCSB), will be discussing her book, “Short Circuiting Policy: Interest Groups and the Battle Over Clean Energy and Climate Policy in the American States” (New York: Oxford University Press, 2020).

Abstract: In 1999, Texas passed a landmark clean energy law, beginning a groundswell of new policies that promised to make the US a world leader in renewable energy. As Leah Stokes shows in Short Circuiting Policy, however, that policy did not lead to momentum in Texas, which failed to implement its solar laws or clean up its electricity system. Examining clean energy laws in Texas, Kansas, Arizona, and Ohio over a thirty-year time frame, Stokes argues that organized combat between advocate and opponent interest groups is central to explaining why states are not on track to address the climate crisis. She tells the political history of our energy institutions, explaining how fossil fuel companies and electric utilities have promoted climate denial and delay. Stokes further explains the limits of policy feedback theory, showing the ways that interest groups drive retrenchment through lobbying, public opinion, political parties and the courts. More than a history of renewable energy policy in modern America, Short Circuiting Policy offers a bold new argument about how the policy process works, and why seeming victories can turn into losses when the opposition has enough resources to roll back laws.

Leah C. Stokes is Assistant Professor of Political Science and an affiliate with the Bren School of Environmental Science & Management and the Environmental Studies Department at the University of California, Santa Barbara (UCSB). She works on energy, climate and environmental politics. Within American Politics, her work focuses on representation and public opinion; voting behavior; and public policy, particularly at the state level. Within environmental politics, her research examines climate change, renewable energy, water and chemicals policy.

Leah’s book, Short Circuiting Policy, examines the role that utilities have played in promoting climate denial and rolling back clean energy laws. It received the 2020 Best Energy Book award from the American Energy Society and was listed in The New York Times five climate books from 2020. Leah has also contributed to the anthology, All We Can Save, which is a collection of essays written by influential women in the climate space.

This event is sponsored by the ISPS Policy Lab.