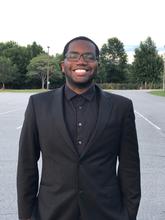 Jaster Francis is majoring in Philosophy and Political Science with a concentration in American law and justice.  He is particularly interested in the intersections of race, class, and the development of mass incarceration during the late 20th century.  As an Edward Bouchet fellow, he conducts and presents research on “American Racial Capitalism and the Criminal Justice System.”  He also works with Project Youth Court to find restorative and community-based alternatives to offenses committed by Connecticut youth.