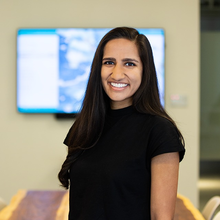 As a Dahl Scholar, Sarah Merchant worked with ISPS Director Jacob Hacker and built off of the research she did for her thesis where she studied the Black-white wealth gap in the US over time and looked at how the gap was affected by the 2008 housing crisis.  She then extended this national analysis to the state-level by looking at the racial differences in foreclosures in Connecticut and describing the role of racial differences in high-cost loans in creating racial disparities in foreclosures. This work broadly tied together the effect of discrimination in the housing market on the large wealth gap between African American and white households in the U.S.

Currently, Sarah is a research assistant at the Harvard Economics Department working for Professors Raj Chetty, Nathan Hendren, and John Friedman at the Equality of Opportunity Project. She works with the research team to study the ways in which race, the neighborhood a kid grows up in, and other structural factors can affect a kid’s future outcomes (such as what college they will go to, how much they will earn, and whether they will be incarcerated). She also works with the policy team to coordinate with local stakeholders to use neighborhood-level data to inform local policy decision-making.