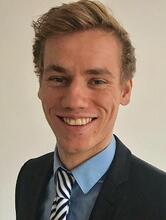 Abstract: Do mass mobilizations bring about social change? This paper investigates the impact of the Black Lives Matter protests that erupted after George Floyd’s death on the 2020 presidential election. Using local precipitation as an exogenous source of protest variation, we document a marked shift in support for the Democratic candidate in counties that experienced more protesting activity. Ancillary analyses show that increased voter mobilization may explain some but not all of the effect, and that protests shifted people’s attitudes towards racial disparities. Taken together, these findings suggest that BLM protests caused a progressive shift among Independent and Republican oriented voters.

Bouke Klein Teeselink is a postdoctoral researcher at the Yale School of Management. He holds a PhD in finance from Vrije Universiteit Amsterdam, and an MPhil in Economics from Tinbergen Institute. His research lies on the intersection between economics, psychology, marketing, and political science. He predominantly focuses on studying behavioral phenomena in large, naturally occurring data sets.

LOCATION NOTE: This in-person event will be held in the RKZ Tent if weather permits. Rain location is RKZ 102.