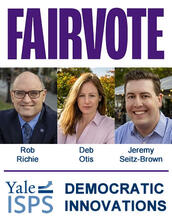 Join us for a discussion of research data availability for the study of ranked choice voting (RCV). This virtual event will feature presentations by Rob Richie, Deb Otis and Jeremy Seitz-Brown of project FairVote, followed by a Q&A period. The event is being hosted by the new Democratic Innovations program at ISPS. Registration is required in advance on Zoom. LINK TO REGISTER ON ZOOM

FairVote is a nonpartisan organization seeking better elections for all. They research and advance voting reforms that make democracy more functional and representative for every American. FairVote has a proven record since 1992 as a trailblazer that advances and wins electoral reforms at the local, state and national level through strategic research, communications and collaboration. Today, they are the driving force behind advancing ranked choice voting and fair representation in multi-winner legislative districts that will open up our elections to better choices, fairer representation and more civil campaigns.

The event is being moderated by Alan Gerber, the Charles C. & Dorathea S. Dilley Professor of Political Science and Director of ISPS.

Sponsored by Democratic Innovations - A new program at ISPS.