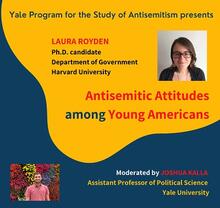 Concern about antisemitism in the U.S. has grown following recent rises in deadly assaults, vandalism, and harassment. Public accounts of antisemitism have focused on both the ideological right and left, suggesting a “horseshoe theory” in which the far left and the far right hold a common set of anti-Jewish prejudicial attitudes that distinguish them from the ideological center. I will discuss implications of several experiments on an original survey of 3,500 U.S. adults, including an oversample of young adults, who have been previously found to have higher rates of antisemitic views. Contrary to the expectation of horseshoe theory, the data show the epicenter of antisemitic attitudes is young adults on the far right. I will also discuss studies that investigate antisemitic attitudes among racial minority groups, as past research has shown their comparatively negative views of Jews. Prior theories from the literature for this phenomenon—group competition, broader anti-White attitudes, spillover from anti-Israel attitudes, and more—do not seem to explain the racial differences in antisemitic attitudes. Overall, these findings call for renewed interest in the intersection of ideology, race, and antisemitism.

This is a free webinar event, but please REGISTER IN ADVANCE AT THIS LINK.

Laura Royden is a fifth-year Ph.D. student in the Government Department at Harvard University. She is primarily interested in antisemitism and Jewish politics, but also occasionally election law and judicial politics. Laura previously worked at the Brennan Center for Justice and the Harvard Kennedy School. She completed her undergraduate studies at MIT in urban studies and planning in 2014.

The event will be moderated by Joshua Kalla, Assistant Professor of Political Science at Yale University.

This is part of the Benjamin (Yale 1962) and Barbara Zucker Lecture Series and co-sponsored by the Yale Program for the Study of Antisemitism.