Cass Sunstein at informal ISPS talk: On the Crossroads of Academia and Government 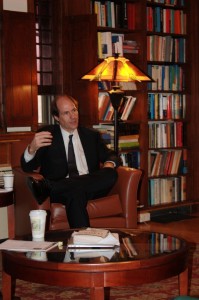 Cass Sunstein, former director of the White House Office of Information and Regulatory Affairs in the Obama Administration, gave an informal talk at ISPS on November 13 where he discussed what drove him to pursue scholarship at the intersection of law, political science and behavioral economics as well as public service. Serendipity, he noted, played a key role in his life. His first appointment out of Harvard Law School was at the University of Chicago in 1981. “They were electric, dynamic and they were interested in me. It was a hothouse of ideas,” he said. He also cited as influential in his thinking the work of Dick Thaler and Christian Jolls and their positive theory of human behavior; the work of Daniel Kahneman on punitive damage; and his Supreme Court clerkship for Thurgood Marshall, who always focused on the human consequences of legal decisions. Bringing his academic background to the White House was at first challenging, he noted. In the academy people work in small groups and pursue what is most interesting; colleagues value ideas and thinking. In government, people work in large groups and think about what is most important, focusing on actions that will be helpful to people. But, he added, “ideas that come from the academic domain have an impact.” He cited several regulatory decisions that were influenced by academic research, including rules to prevent busses from rolling over and the replacement of the famous USDA Food Pyramid with a plate-centered guide to healty eating. Sunstein was invited to Yale to deliver the Storrs Lectures at the Law School.  His lectures were titled, Human Error and Paternalism, and discussed the limits of the “nanny state.”