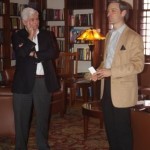 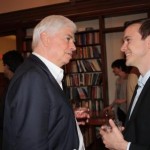 Chris Dodd spoke about financial reform (the Dodd-Frank Act) and the Affordable Care Act, explaining the different process by which these two bills gots passed and how that affected how it was received by the public. He also presented an inside view of the Senate now and then, and his thoughts on current bipartisan discord. A reception was held for him in the ISPS library after his class on March 28.