The window for renewing the Violence Against Women Act of 2012 (VAWA) has closed. Though new VAWA legislation was recently introduced in the Senate, Congress has no excuse for failing to reauthorize VAWA during the last two years. During this period, far too many women have faced victimization. Each year, nearly 7,000,000 women in the U.S. are victims of intimate partner violence and 30 percent of female homicides are perpetrated by intimate partners. Intimate partner violence (IPV) is linked to numerous adverse outcomes for women, including physical and mental illness, unemployment, and homelessness, underscoring the devastating impact of IPV on all facets of women’s lives. In addition to warranting humanitarian concern, IPV packs a hefty fiscal punch: IPV against women costs at least $8.3 billion per year in medical expenses and lost productivity.

Though government organizations and advocacy groups favor the claim that all women are at risk of intimate partner violence regardless of their backgrounds, this is not the full story. While it’s certainly possible for any woman to become victim of violence, researchers have known for decades that the risk of IPV is higher among young, socioeconomically disadvantaged women who live in urban areas. An emergent research literature, including my own work in progress, seeks to understand how neighborhood context influences the incidence of IPV.

In an analysis of arrest data from Chicago, I found that 54 percent of all intimate partner (IP) homicides committed between 1994 and 2011 occurred in just 20 percent of the city’s neighborhoods (two thirds of the victims in the 510 cases reported to police during this time period were women). The map below clearly indicates that such homicides are heavily concentrated (click on the map to enlarge). I also conducted analyses to determine the likelihood that this spatial clustering was due to chance. My results show that the concentration of violence is statistically significant and unlikely to be a random pattern. 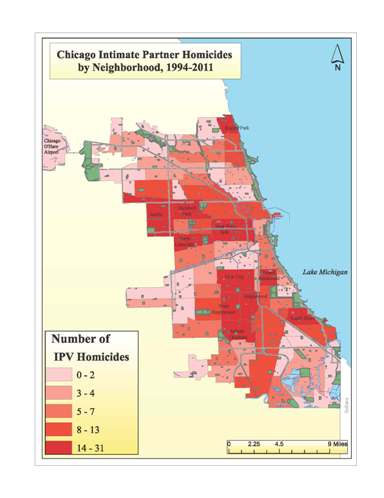 It may come as no surprise to Chicago locals that the highest counts of IP homicide are clustered in neighborhoods like Austin, Englewood, and South Shore; residents of these areas face high rates of all types of violent crime and other types of disadvantage. At the same time, neighborhoods like Lincoln Park and Hyde Park, which have much lower rates of violent crime, saw very low to no IPV homicides during the same time period.

These results suggest that we need a new paradigm for studying IPV: one that sufficiently addresses the contextual factors and spatial patterns relevant to the perpetration of violence against women. There is no doubt that IPV is devastating for all women; nevertheless, my evidence demonstrates that the impact is disproportionately borne by women who already live in the most vulnerable communities – places where resources are already likely to be stretched beyond capacity. From a scholarly perspective, these results show that IPV deserves more attention from urban sociologists. Though a handful of recent studies have examined the relationship between neighborhood disadvantage and IPV, to my knowledge, none have made use of sophisticated spatial statistical techniques that allow researchers to model the diffusion of crime across space. These types of methods are an untapped resource in the study of IPV, and I plan to put them to use in my ongoing research. The maps above are a preview of a larger research project I’m pursuing to determine if neighborhood-level characteristics like high poverty or resource deprivation cause higher levels of IPV.

The 2013 Senate bill reauthorizing the Violence Against Women Act acknowledges the disparate risks of IPV by seeking to extend legal protections to particularly vulnerable groups, including LGBT people and Native Americans that were previously underserved by the law. If and when VAWA is reauthorized, however, we ought to focus on making additional improvements. Given evidence that IPV is concentrated in space, our response to IPV shouldn’t be limited to programs that target individuals (such as batter-intervention programs). We also need to develop a place-based approach that focuses attention on neighborhoods with the highest risk of IPV, mobilizing resources more effectively to address the unmet needs of our country’s most vulnerable women.

Acknowledgements: Restricted data for this project were provided to Dr. Andrew Papachristos by the Chicago Police Department, and analyses were completed under his supervision. Analyses presented here solely represent the opinions of the author and not the City of Chicago or the Chicago Police Department. A public version of these data from 2001 forward is available at the City of Chicago Data Portal.