[This piece was originally published in The Upshot on October 28, 2015. It is being reprinted in its entirety with the permission of the authors.]

Ben Carson isn’t just ahead in Iowa. As of now, it looks as if he can beat any of his Republican presidential challengers in a one-on-one contest.

We figured this out by running a new kind of poll, one that does a much better job of measuring the will of the voters. In an election contest with a dozen or more candidates, it doesn’t make sense to just look at who is winning the horse race. Using this alternative approach, we have Donald Trump leading Mr. Carson, 30.6 percent to 23.4 percent, but that leaves out what nearly half the other likely voters think of these two. Marco Rubio’s 10.7 percent to Jeb Bush’s 8.0 percent ignores how the other 81 percent of respondents would choose between them.

Instead of asking who gets the most first-place votes, we ran a pairwise contest between each of the top 12 candidates.

The idea of looking at all pairwise contests was first proposed by the French political theorist Marquis de Condorcet over 200 years ago. He thought of elections as being a scientific measurement of the population’s preference. A candidate strong enough to beat all comers was the one most likely to reflect the will of the people.

In his honor, we say that a candidate who can beat all rivals is a Condorcet winner. As of today, that candidate is Mr. Carson, though it is a very close call.

Mr. Carson beats each and every other candidate in pairwise races, as seen in the chart. The only close call is versus Mr. Trump, with Mr. Carson ahead by 50.6 percent to 49.4 percent. But with a sampling error of 0.7 percent, this victory is not statistically significant.

Ben Carson Has Surprising Strength
Ben Carson beats each of 11 candidates in a matched pair race. Only with Donald Trump is it even close (and it’s very close).

Percent choosing Carson in a head-to-head race with: 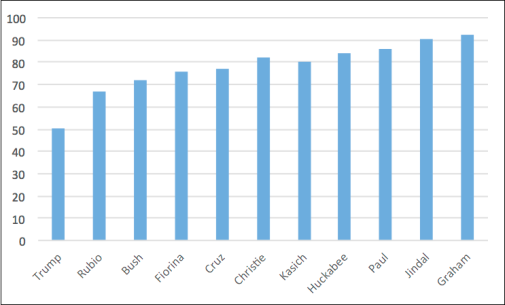 Here’s how we did it. With the help of Google Consumer Surveys, which samples individuals who respond to surveys to gain access to premium content on selected websites, we surveyed 6,072 people who report themselves as being either very likely to or will definitely vote in a Republican primary. These individuals were given a chance to rank their top six candidates. Our survey was taken Oct. 21 - 22 and we’ve weighted the Google survey results so that the participants match the age and gender balance seen in the 2012 Republican primary.

With that ranking in hand, we voted for them in all the pairwise matchups — 66 of them. In a contest between someone’s second and fifth choice, we presumed he or she would pick No. 2 over No. 5. Similarly, that voter would pick No. 5 over No. 6 or any unranked candidate. You can see all the data and do you own analysis here and here.
In contrast with some very recent polls, including one by The New York Times/CBS News, Mr. Trump still has a lead over Mr. Carson when it comes to first-place votes.

The reason Mr. Carson does so well in the head-to-head contests is embedded in voters’ second-place choices (and beyond). It is little surprise that 36.4 percent of Mr. Trump’s supporters would shift to Mr. Carson if Mr. Trump were to drop out. But Mr. Carson’s supporters don’t quite return the favor. Only 24.2 percent of them would move to Mr. Trump, while another 13.4 percent would switch to Mr. Rubio and 15.3 percent to Carly Fiorina.

A surprise for us is the extent to which Mr. Rubio’s supporters break for Mr. Carson (21.9 percent), more so than to Mr. Bush (16.2 percent), Mrs. Fiorina (13.4 percent) or Mr. Trump (6.2 percent). Indeed, Mr. Carson gets the most second-place votes from all but John Kasich, Lindsey Graham and Bobby Jindal supporters.

We expected that Mr. Bush’s supporters would be more establishment types, but their top second choice is Mr. Carson with 17.8 percent, while Mr. Rubio comes in next with 14.4 percent. We thought that Mr. Trump would be the last candidate that Mr. Bush supporters would select, but it turns out that almost as many (11 percent) choose Mr. Trump as a second choice as choose Mr. Rubio.

Some people have assumed that Mr. Trump is no one’s second choice. That’s not true. He’s the top second choice of Mr. Carson’s supporters, and Mr. Trump follows Mr. Carson with supporters of Rand Paul (15 percent), Mike Huckabee (14 percent) and Mr. Jindal (12 percent). He even gets over 15 percent of second-choice votes from Ted Cruz. You can find the full matrix here.

Other than Mr. Carson’s strength, we can see the much stronger position of Mr. Rubio compared with Mr. Bush. Mr. Rubio is only ahead by 10.7 percent to 8 percent in first-choice voters, but he beats Mr. Bush, 60.2 to 39.8, in their pairwise contest.

What the data as a whole tells us is that the Republican primary electorate isn’t just split between establishment types and non¬politicians. Even those who support established politicians are willing to switch over to the disrupters if their candidate falls by the wayside.

Another way to see this is to predict what will happen after many of the candidates have dropped out. That has to happen at some point. A note of caution before we continue this speculative exercise. As candidates drop out, the strategies of the remaining candidates will change; the patterns of media attention and coverage will also respond to the altered political environment. A likely voter’s current rankings can’t reflect these hypothetical, yet possibly important, influences.

That said, the current rankings are a reasonable place to start. Knowing the second, third and fourth choices of the different respondents allows us to reallocate their votes when their top candidates drop out and then their second choice also falls by the wayside.

What happens if Mr. Jindal, Mr. Graham, Chris Christie, Mr. Huckabee, Mr. Kasich and Mr. Paul were all to drop out? What you see is that the continued strength of Mr. Trump and Mr. Carson is a result of the fact that they are the second (and third) choices of voters who would otherwise select a more traditional candidate.

Deep Appeal of Trump and Carson
Donald Trump and Ben Carson tend to be the second (and third) choices of voters who would otherwise select a more traditional candidate.

The percent of first-choice votes if only these candidates remain: 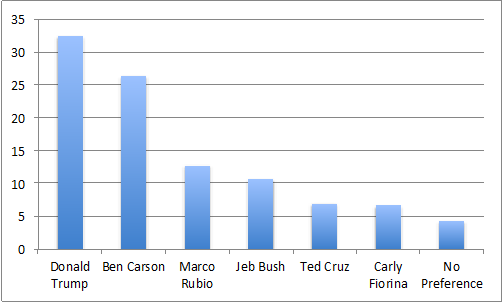 You can also see that Mr. Carson is gaining on Mr. Trump but hasn’t yet got the lead. Mr. Carson goes ahead only after Mr. Rubio, Mr. Bush, Mr. Cruz and Mrs. Fiorina drop out.

What would happen if Mr. Trump were to withdraw along with Mr. Paul, Mr. Huckabee, Mr. Christie, Mr. Graham and Mr. Jindal? With all the second-place votes Mr.
Carson picks up (along with third-place choices, too), he dominates the race.

A Race Without Trump
If Donald Trump is not an option, Ben Carson’s lead over the field becomes larger.

The percent of first-choice votes if only the following candidates remained in the race: 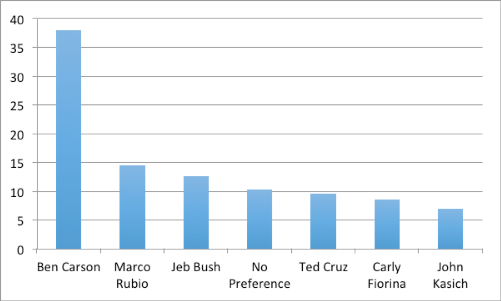 When we decide to take one or more candidates out of the race, those choices are somewhat arbitrary and the race may not shake out as we suppose. Instead, if we look at pairwise competitions, it is as if all the candidates but the two under question are out of the race. And by looking at all 66 pairwise combinations,  we can see the depth of each candidate’s strength.

Google Consumer Surveys also gave us the opportunity to ask whether respondents had seen any of the Republican debates. The results here are revealing.

Just because Mr. Carson is the Condorcet winner does not mean he has the greatest chance of winning the Republican nomination. Much can and will happen between now and next July.

Our main goal in presenting these numbers goes beyond finding a Condorcet winner. We want to change the way political surveys are done. Instead of just asking for their first choice, asking likely voters to rank their choices provides a fundamentally richer insight into the true will of the people. We hope the insights from this survey will motivate professional pollsters to follow suit.