Relationships Matter for Poverty, But Not in Isolation

In a seminal 2004 article, Sara McLanahan argued that there are in America “diverging destinies” for the children of the most and least educated.  The entry of women into the labor force, the propensity for people to marry people with similar levels of education to themselves, and the fact that college-educated women increasingly delay having children means that the best educated have greater resources to devote to their children than ever before.  The least educated, on the other hand, have acquired no similar increase in resources to devote to their children. For a number of reasons, chief amongst them stagnating economic opportunities, low education mothers have entered the labor force more slowly than their better educated counterparts; their household incomes have stagnated; they are having children at no later an age than they did thirty years ago, and they are much more likely to be single parents.  Given, McLanahan argues, what we know about the importance of parents for children’s outcomes, the increasing disparity in parental resources by education is exacerbating inequality.

The same traits that are responsible for the growing disparity between the resources the most and least educated parents can devote to their children are also unequally distributed by geography in America.  Look at these three maps showing the proportion of births outside of marriage, the proportion of those aged 24 or under married, and the proportion cohabiting.  For cohabitation, rates are highest in the Northeast, West and Midwest, while extramarital fertility is concentrated in the South. For both, rates are lowest in the central states. Marrying young has a somewhat different geography: it’s most common in the South, Appalachia and the Mountain West.  Harder to see on the maps, but cohabitation and extramarital fertility is also more common in urban areas, while early marriage is most frequent in rural America.

Marriage Rates for Under 25s 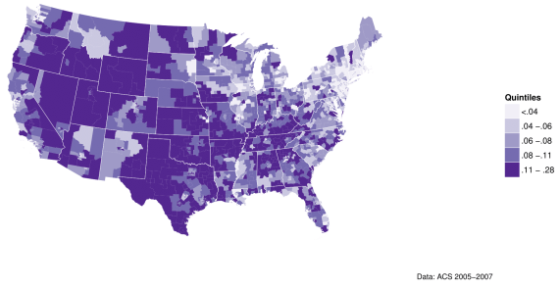 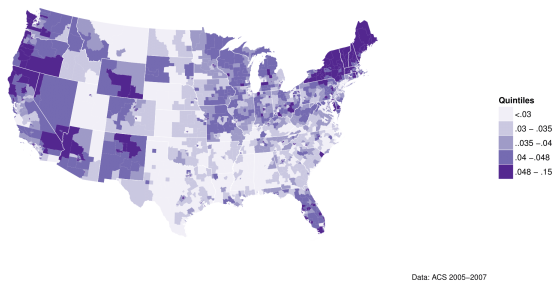 Extramarital Births as a Proportion of Total Births 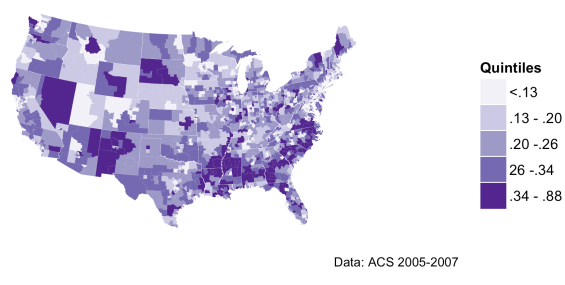 This means that the children of parents with fewer resources (whether time, money or educational or cultural capital) are doubly disadvantaged: by first parental, and second, community resources.  Communities matter for children for myriad reasons. Poorer areas are more likely to be exposed to environmental hazards such as lead, air or noise pollution, all of which impact development.  Poor communities also on average have higher crime rates,  and are less effective at exerting social pressure on young people to avoid risky behaviors.  And poor areas tend to have fewer institutional resources: transport, libraries and access to healthy food all tend to be worse in low income neighborhoods.

And of course the worst neighborhoods have the worst schools: teacher retention is harder, there tend to be more behavioral problems, and local funding formulas mean that schools in poor neighborhoods are also poor schools. Consequently, outcomes are worse, particularly for children from disadvantaged families.

Recent research shows that poor neighborhoods are a trap, and increasingly so, with lower rates of both geographical and social mobility. The concentration of relationship types deleterious to upward social mobility likely contribute to this, as evidence shows that – unsurprisingly – the preferences of both peers and partners inform what a person wants.

Evidence that outcomes are worse for the children of parents in certain types of relationship is often used by people to call for a marriage promotion agenda (as an aside it is interesting that almost no one advocates trying to persuade people to delay fertility even within marriage, even though there is strong evidence that this matters just as much as marriage itself). The problem with marriage promotion is it just isn’t very effective, either at promoting marriage or changing outcomes.

The complex causal nexus of relationship, geography and outcomes points to why: changing the marital status of a person without changing the things with which cohabitation and extramarital fertility are so closely correlated fails to address the mechanisms creating the disparities in the first place.  Instead of attempting to reduce the disparities between married and unmarried families by reducing the number of latter, effective policy should seek to address the disparity itself.  Because mechanisms of inequality are operating at both the family and the neighborhood models, policy needs to do the same.  The easiest way government could reduce the disparity in resources between families would be through cash transfers, as occurs in much of Europe. But this needs to be combined with policy that targets neighborhood level inequality, by improving local transport options, reducing crime, or reforming school funding formulas.

Tom Lyttelton is an ISPS Graduate Policy Fellow and a doctoral student in the sociology department at Yale. His research focuses on demography and inequality in America.