When the Ku Klux Klan Endorsed a Black, Liberal Democrat for Senate

With great fanfare and little surprise, the Ku Klux Klan issued their endorsement  of Donald Trump earlier this month. After his election last week, a North Carolina chapter of the KKK announced that they would be throwing a victory parade to celebrate. However, twenty-six years ago in the same state the Klan made a rather more surprising endorsement, backing a liberal, African American Democrat for the US Senate against Senator Jesse Helms.

Helms should have been an obvious choice for the Klan. When he retired from the Senate in 2002, the Washington Post eulogised, ‘What really sets Jesse Helms apart is that he is the last prominent unabashed white racist politician in this country’. Helms’s first job in politics at the age of 29 was for Senator Willis Smith who had been elected using the rather unsubtle slogan ‘White People Wake Up: Before It’s Too Late… Frank Graham favors mingling of the races’ (Figure 1). Forty years later, UNC political scientist Ted Arrington commented, ‘Jesse hasn’t changed a lick’.

Figure 1. Excerpts from Smith for US Senate campaign leaflet (1950) 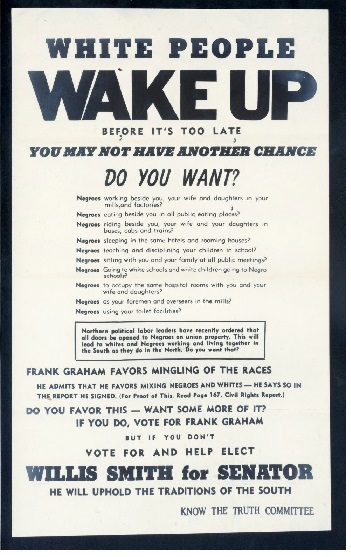 A lifelong opponent of all federal civil rights legislation, Helms wrote after the passage of the Voting Rights Act that Mississippi was ‘soon to be a Negro republic (or a Negro dictatorship)’. As a senator, he opposed every civil rights bill and the creation of a public holiday honoring Martin Luther King, whom Helms accused of communist sympathies. As late as the 1990 campaign, Helms was arguing that school desegregation had been a mistake. At a press conference in September 1990, Helms told reporters, ‘Even blacks – the minorities – acknowledge now that this has been highly destructive to their interests’.

In spite of these seemingly unimpeachable credentials, Helms missed out on the KKK’s endorsement to Harvey Gantt, the former mayor of Charlotte. Gantt had been an activist in the civil rights movement who had participated in sit-ins in Charleston and desegregated Clemson University in 1963. Gantt was an unapologetic liberal who said of Helms in October 1990, he ‘is the most natural opponent I can have…His views are diametrically opposite of mine. And that’s the perfect kind of political race – where he doesn’t welsh on his positions and I don’t welsh on mine’. Helms, in turn, was unflinching in his use of race in communications against Gantt (Figure 2). 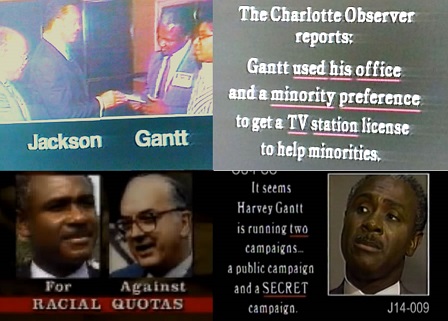 In this racially polarized election, the KKK announced that they would support the racial liberal over the unreconstructed foe of civil rights. In a press release I found in the archives of the University of North Carolina (Chapel Hill), the ‘Grand Dragon’ of the ‘Realm of North Carolina’ acknowledged the unusual choice, boasting, ‘This is the first time in it’s [sic] history that the Invisible Empire, Knights of the Ku Klux Klan has ever endorsed a minority candidate for public office’ (Figure 3). 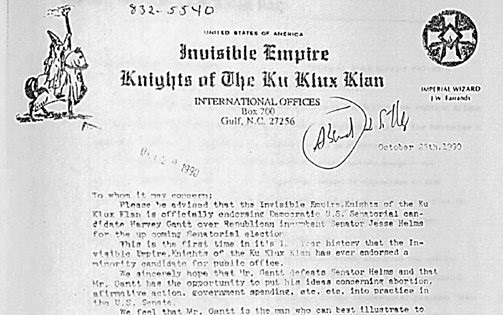 Apparently, the Klan had concluded that a black senator would be a great boon to white supremacist recruitment:

‘We sincerely hope…Mr Gantt has the opportunity to puts his ideas concerning abortion, affirmative action, government spending, etc, etc, into practice…We feel that Mr Gantt is the man who can best illustrate to the citizens of NC what the Ku Klux Klan has been saying for years; we envision him as being the catalyst to a powerful resurgence of our hooded order in the Tarheel State. May he fulfil that role admirably’.

Given the growth in far-right militia under Barack Obama’s presidency, the Klan were probably correct. Such an episode is instructive to those who claim that Hillary Clinton’s victory would have silenced racial hostility. Ultimately these groups thrive on the perceived threat of a villain in a position of power – a role in which Clinton would have served well.

Richard Johnson is visiting graduate student at ISPS who studies Politics at Oxford University (Nuffield College).  His work focuses on race, representation, and elections in the United States.