Democrats Aren’t Running Pro-Biden Ads. The Data Says They Should.

[First published at Data for Progess on June 9, 2020 and cross-posted with permission.]

Joe Biden became the presumptive Democratic nominee on April 8. But you wouldn’t know it from the broadcast TV ads Democrats have been running. According to data on TV ad spending, between early April and late May, 88 percent of ads aired by Democrats and their affiliated SuperPACs were attacks on Trump, and only 11 percent promoted Biden.

It’s understandable that Democrats enraged by years of the Trump presidency would want to focus on going negative on Trump – and not all elite Democrats are enthusiastic about Biden. But social science evidence suggests that they need to go positive on Biden if they care about defeating Trump.

There’s a simple reason why: people are less open to changing their minds about something the more they know about it – and voters know much more about Trump than about Biden. For example, in a late-March Yahoo! News/YouGov survey, 61 percent of respondents said they had heard “a lot” about Trump in the prior week compared to 17 percent for Biden. And voters have much stronger feelings about Trump: for example, in a survey we ran, more than twice as many respondents said they had no opinion about Biden (16 percent) than Trump (7 percent).

The fact that voters already know what campaigns are telling them, or have already decided how they feel about a candidate because they know enough already, helps account for the very small to zero persuasive effects of many campaigns. However, unlike Trump, voters don’t know much about Biden yet, and many don’t know how they feel about him – meaning voters should be much more open to persuasion when campaigns talk about Biden than when they talk about Trump.

Are most Democratic campaigns right to air anti-Trump rather than pro-Biden ads, or are they missing out on the chance to bring voters to their side?

We recently completed a research project that speaks to this question. During the first half of 2020, we conducted online survey-based experiments with 69,270 people. In the surveys, we randomly assigned respondents to receive anti-Trump, pro-Trump, anti-Biden or pro-Biden messages (see our full working paper here). We composed 291 distinct messages spanning each candidate’s positions, accomplishments, and personal controversies – covering the good and the bad. Later in the survey, we asked respondents their intended vote choice in the 2020 presidential election. This allowed us to estimate each message’s effect on Trump vote margin compared to a control group that read no messaging. For example, the statements included how Donald Trump’s lax enforcement of the Clean Air Act has led to thousands of American deaths (in the anti-Trump group), Trump’s cutting of hundreds of business regulations (in the pro-Trump group), Biden’s repeated calls for Social Security cuts (in the anti-Biden group), and how Biden’s experience during the Ebola crisis has prepared him to manage the coronavirus pandemic (in the pro-Biden group). 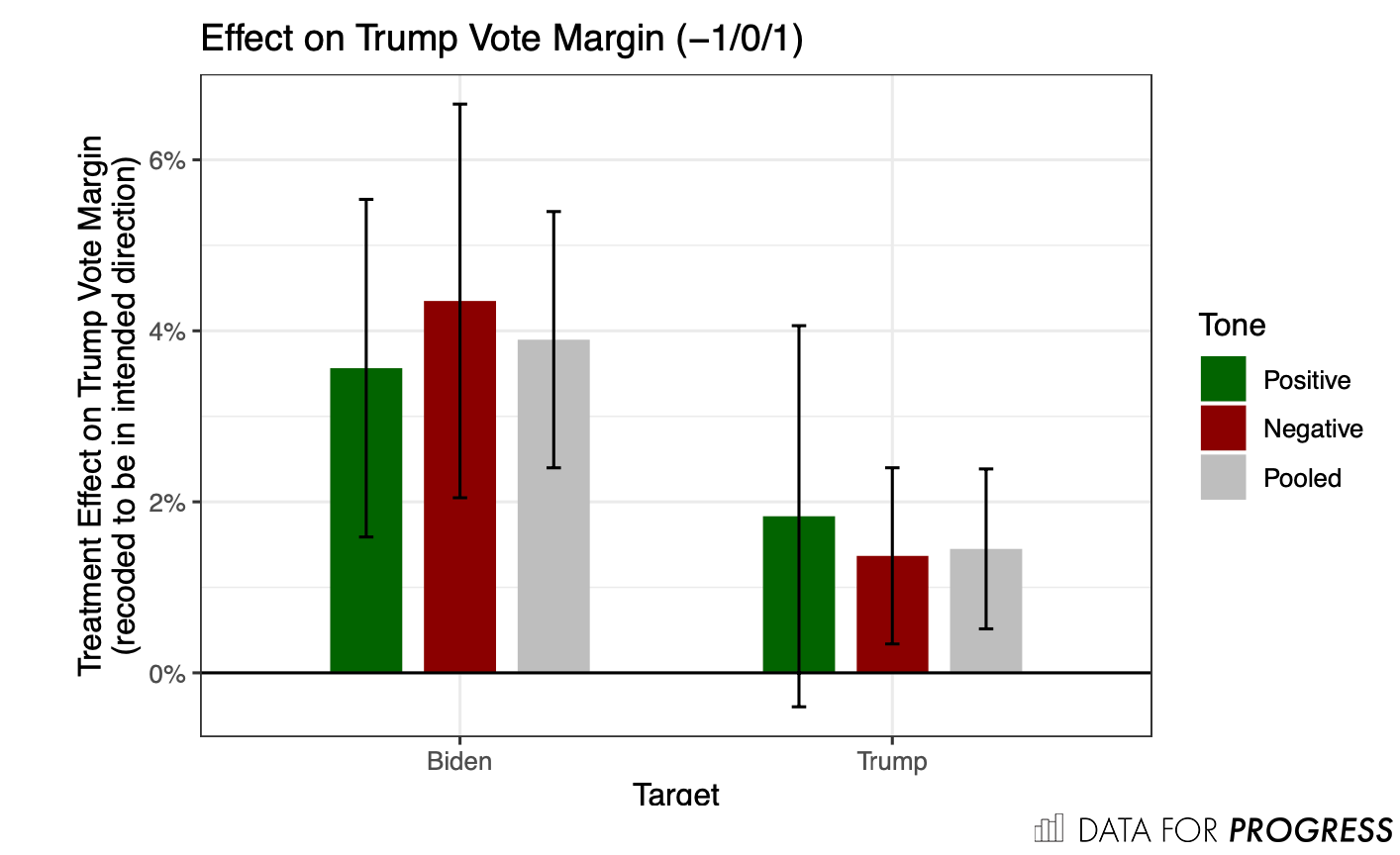 This result supports the notion that because voters know more about Trump, messages about Trump will be less persuasive than messages about Biden, the candidate about whom voters know less. (In the working paper, we go into more detail on why even the small effect on Trump messaging may be spurious.)

The positive information about Biden appears to be broadly persuasive across all voters, but is especially clear among Republicans and Independents. This effect isn’t just a case of Democrats “coming home” after a contested primary who might have “come home” later anyway. Instead, it appears that pro-Biden information can cause people who would otherwise have voted for Trump to instead vote for Biden.

What exactly should Democrats be saying about Biden? In the paper we provide all the statements we tested in all four groups. For Biden, the most effective statements were about his experience managing the Ebola outbreak and his coronavirus plans, his record of bipartisanship in the Senate, his experience growing up in a working-class household, and his plan to make community college free. Very few voters likely know about any of these pro-Biden points – the Democratic organizations aren’t telling them.

Some of our data also shows that the more specific the messages the better – simply telling voters that Biden is experienced may not work as well as telling them the details that very few likely know. For example, when talking about Biden’s upbringing, we didn’t just assert that he was working class, we gave details: “Joe Biden knows what it’s like for working-class Americans because he was born and raised in a working-class American family. His family struggled when he was a child, and for several years they had to live with their grandparents. Growing up in Scranton, Pennsylvania, his father had a hard time finding work as factories closed and coal mines shuttered. His family eventually moved to Delaware for new opportunities, where Biden now lives. He ran for US Senate for the first time to expand access to affordable health care to improve the lives of working-class families like his. He understands what it’s like for hard-working Americans because that’s who he is – and promises to advocate for them every day.”

Writing and running pro-Biden ads is eminently possible (see the Lincoln Project’s ad here, as an example). While attacking Trump might be a motivating and unifying force on the left following a primary that left many progressives disappointed, when it comes to changing voter’s minds about the general election, Democratic campaigns may do well to focus more on informing voters of what they do not know – which includes nearly everything about Biden – than on trying to change their minds about the candidate who has already been on their TV screens non-stop for over four years.

David Broockman (@dbroockman) is an Associate Professor of Political Science at the University of California, Berkeley.

Joshua Kalla (@j_kalla) is an Assistant Professor of Political Science and Data Science at Yale University.