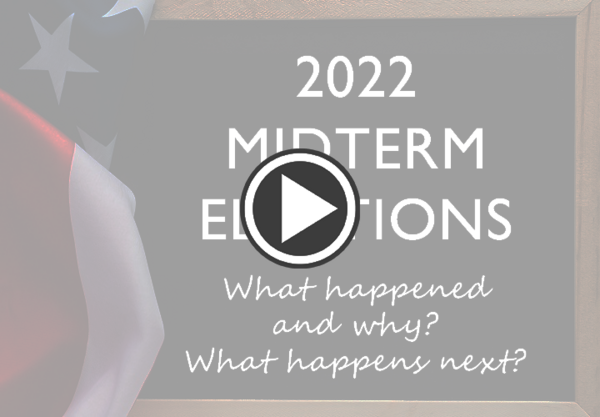 After all the commercials, speculation, voting, counting, speechmaking, and the rest, Yale’s Institution for Social and Policy Studies is here to try and make sense of it all. ISPS convened a panel of experts Thursday to dig into the data and help explain voting behaviors and trends behind the 2022 midterm election results.

Since polls closed across the country on Nov. 8, political scientists and commentators have agreed that Republicans underperformed expectations for a party out of power in the elections midway between presidential contests. The “red wave” of Republican victories never materialized. Democrats even picked up two state governorships and a seat in the U.S. Senate, which they will control for another two years even as Arizona Sen. Kyrsten Sinema declared herself an independent Thursday evening.

“It’s not just that it didn’t happen,” said Michael Podhorzer, a leading political strategist and analyst. “It didn’t happen in a spectacular way.”

Podhorzer, a former political director for the AFL-CIO, joined an online panel with political scientists Morris Fiorina of Stanford University, Joshua Kalla of Yale, and Lynn Vavreck of the University of California, Los Angeles, moderated by ISPS Director Alan Gerber.

“We had two midterms in the country,” Podhorzer said. “A red wave and a blue undertow.”

Podhorzer said the elections were very different in various parts of the country and influenced by a large new pool of voters, noting that election turnout after Donald Trump’s victory in 2016 jumped by 14 percent in 2018, twice as much as in any year since the period following the Civil War.

In states without a competitive top-of-the-ticket statewide candidate endorsed by Trump, the Republican red wave emerged as expected, Podhorzer said. But in states with at least one U.S. Senate or governor candidate endorsed by Trump and deemed competitive by prominent election forecasters, the 2022 election was a virtual rerun of Democratic victories in 2018 and 2020, led by voters who don’t habitually turn out for midterm elections but who understood the stakes this year were about stopping Trump-supporters from taking over Congress and state capitals, Podhorzer said.

“I would argue people in those states understood this is playing for keeps,” he said. “MAGA or no MAGA.”

Fiorina suspected that Republican candidates were hurt by the public’s general perception of extremism within the party.

Kalla, a resident faculty fellow with ISPS, agreed that Republicans likely suffered from the perception of extremism and the overall quality of candidates nominated by primary voters. He also suspected that Democrats benefited from higher levels of fundraising and campaign spending. But he said no one has yet designed a way to measure the potential effect on voters of the Republican-endorsed U.S. Supreme Court decision from June that stripped federal abortion protections.

Vavreck explained the midterm results through the lens of what she and her colleagues have dubbed calcification, an enhanced form of polarization involving increasing homogeneity within parties, increasing heterogeneity between parties, high importance of identity-inflected issues, and partisan parity within the electorate.

The dimension of conflict has shifted within the last decade, she said. Americans are fighting over different issues than they used to. Instead of political arguments over the size of the government or the tax rate, we are battling over highly emotional and identity-based issues, such as separating children from their parents at the border or banning people from Muslim-majority countries.

“Just like in the human body, calcification makes things stiff and rigid,” Vavreck said. “Why? Stakes of elections are high, the other side is farther away than ever, and because of partisan parity, victory is in reach by both sides.”

In 1952, only one out of two Americans said they saw important differences between the Democratic and Republican parties, Vavreck said. Today, 90% see important differences. People rate members of the opposing party much lower than they did 40 years ago. And elections even at a county level are less likely to see large shifts from one year to the next. In the 1960s and 70s, shifts averaged about 20 percentage points. But today, counties are swinging only about 3 percentage points from the previous election.

“The next election is likely to resemble the last one,” Vavreck said. “The era of the party-changing blowout election is probably gone for now.”

Kalla suggested that it could be a good development that people now see differences between the two parties, because it means that maybe people are being guided more by policy differences and not the personality of their member of Congress.

However, Vavreck said, this could lead to a “whiplash” effect by which one party enacts significant policies that are largely undone by the next party in power.

She also cautioned people against settling on a single cause of election outcomes, such as abortion rights.

“It’s a lot of things” Vavreck said. “In the races you think are close enough for one thing to have mattered, it’s not one thing.”