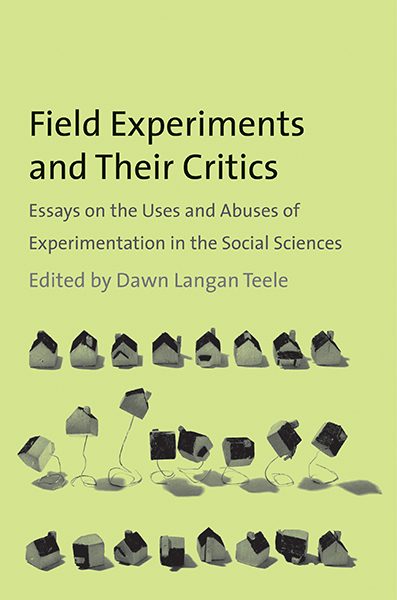 Dawn Langan Teele (ed.), Field Experiments and Their Critics: Essays on the Uses and Abuses of Experimentation in the Social Sciences, New haven: Yale University Press, 2014.

The distinguishing feature of the ISPS Politics & Policy Book Series is the scholarly depth and originality of each volume. Unlike most policy books, which focus narrowly on specific social problems and public laws, the books in the ISPS series strive to place laws and lawmaking in historical and comparative perspective. The authors advance bold and memorable arguments about topics of profound significance. Readers will find a range of scholarly approaches—some qualitative, others quantitative—that together reflect the broad, multi-disciplinary character of ISPS.

In City, Douglas Rae depicts the features that contributed most to city life in the early “urbanist” decades of the twentieth century. City: Urbanism and Its End, by Douglas W. Rae (2005); Rae’s subject is New Haven, Connecticut, but the lessons he draws apply to many American cities. Race, Poverty, and Domestic Policy, edited by C. Michael Henry (2004); In Race, Poverty, and Domestic Policy, C. Michael Henry addresses the question, what explains the continuing hardship of so many blacks in American society? The contributors analyze the long, complex structural and environmental causes of discrimination and the effects on African Americans—the impact of poverty, poor health, poor schools, poor housing, poor neighborhoods, and few job opportunities—and demonstrate how multiple causes reinforce each other and condemn blacks to positions of inferiority and poverty.

Additional books in the series include:

The first books in the newly formed ISPS Politics & Policy Book Series are Rogers M. Smith, Civic Ideals: Conflicting Visions of Citizenship in U.S. History (1999), and James C. Scott, Seeing Like a State: How High-Modernist Plans to Improve the Human Condition Have Failed (1999).

Each of the books leavens its analysis with insights drawn from history, sociology, economics, and political science.

Smith's book has received the following recognition: Association of American Publishers, Government and Political Science Award for Excellence in Professional/Scholarly Publishing in 1997; 1998 finalist, Pulitzer Prize in History (one of three books nominated by the Pulitzer Prize jury); 1998 finalist, Boston Book Review General Non-Fiction Prize (one of five books nominated); and 1998 co-winner of the J. David Greenstone Book Award given by the History and Politics section of the American Political Science Association for best book in history and politics. Civic Ideals received the endorsement of Eric Foner, who called it "important and original," and the Library Journal remarked that the book is "an excellent chronology of the people, parties, movement and developments in this often ignored area of American legal history."

Scott's book was favorably reviewed in the New York Times, The Chronicle of Higher Education, The New Yorker, the Lingua Franca Book Review, and most recently by Francis Fukuyama in Foreign Affairs.