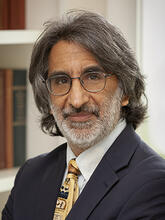 Akhil Reed Amar is Sterling Professor of Law and Political Science at Yale University, where he teaches constitutional law in both Yale College and Yale Law School. After graduating from Yale College, summa cum laude, in 1980 and from Yale Law School in 1984, and clerking for then Judge (now Justice) Stephen Breyer, Amar joined the Yale faculty in 1985 at the age of 26. His work has won awards from both the American Bar Association and the Federalist Society, and he has been cited by Supreme Court justices across the spectrum in more than forty cases—tops in his generation. He regularly testifies before Congress at the invitation of both parties; and in surveys of judicial citations and/or scholarly citations, he invariably ranks among America’s five most-cited mid-career legal scholars. He is a member of the American Academy of Arts and Sciences and a recipient of the American Bar Foundation’s Outstanding Scholar Award. In 2008 he received the DeVane Medal—Yale’s highest award for teaching excellence. He has written widely for popular publications, including The New York Times, The Washington Post, The Wall Street Journal, Time, and The Atlantic. He was an informal consultant to the popular TV show,

He is the author of dozens of law review articles and several books, including The Constitution and Criminal Procedure (1997), The Bill of Rights (1998—winner of the Yale University Press Governors’ Award), America’s Constitution (2005—winner of the ABA’s Silver Gavel Award), America’s Unwritten Constitution (2012—named one of the year’s 100 best nonfiction books), The Law of the Land (2015), and The Constitution Today (2016—named one of the year’s top ten nonfiction books by Time magazine). In 2017 he received the Howard Lamar Award for outstanding service to Yale alumni.