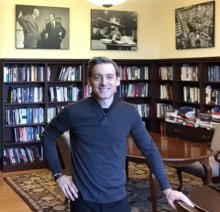 Jacob S. Hacker, Ph.D., is the Stanley B. Resor Professor of Political Science at Yale University. He is co-director of the Ludwig Program of Public Sector Leadership at Yale Law School.  He is also a board member of The Century Foundation, Economic Policy Institute, The American Prospect, and a member of the Scholars Strategy Network steering committee, and a former Junior Fellow of the Harvard Society of Fellows.

An expert on the politics of U.S. health and social policy, he is the author of Let Them Eat Tweets:  How the Right Rules in the Age of Extreme Inequality, written with Paul Pierson (2020); American Amnesia: How the War on Government Led Us to Forget What Made America Prosper, written with Paul Pierson (2016, paperback 2017); Winner-Take-All Politics: How Washington Made the Rich Richer and Turned Its Back on the Middle Class, with Paul Pierson (2010, paperback 2011); The Great Risk Shift: The New Economic Insecurity and the Decline of the American Dream (2006, paperback 2008); The Divided Welfare State: The Battle over Public and Private Social Benefits in the United States (2002); and The Road to Nowhere: The Genesis of President Clinton’s Plan for Health Security (1997), co-winner of the Brownlow Book Award of the National Academy of Public Administration. He is also co-author, with Paul Pierson, of Off Center: The Republican Revolution and the Erosion of American Democracy (2005) and has edited three volumes—most recently, Shared Responsibility, Shared Risk: Government, Markets, and Social Policy in the Twenty-First Century, edited with Ann O’ Leary (2012).