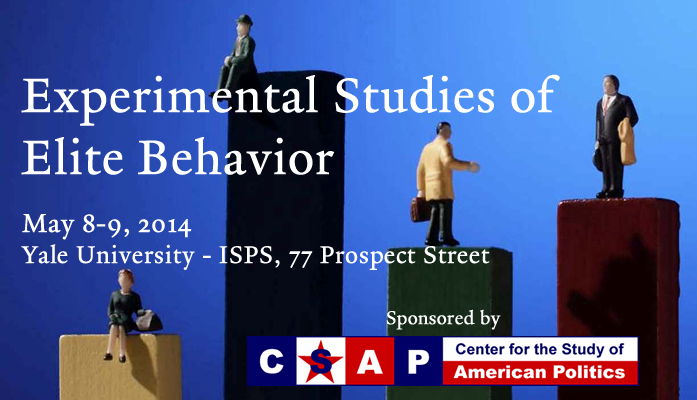 Christian Grose is Associate Professor of Political Science at University of Southern California's Dana and David Dornsife College of Letters, Arts, and Sciences; and is a faculty member in the Political Science and International Relations Ph.D. program. His research interests include American political institutions (Congress and the Presidency), legislative representation, distributive public policy, race and politics, research methods, and field experiments. Christian is the author of Congress in Black and White: Race and Representation in Washington and at Home (Cambridge University Press, 2011). In addition, he has published articles or has articles forthcoming in scholarly journals such as the American Journal of Political Science, the British Journal of Political Science, the Journal of Politics, Legislative Studies Quarterly, Polity, and Presidential Studies Quarterly.

Joshua Kalla will be graduating from Yale University with a B.A. and an M.A. in political science. In the fall he will be a Ph.D. student in the Charles and Louise Travers Department of Political Science at UC Berkeley. His field experiment on campaign donations and access to senior congressional officials received coverage in the Washington Post, NPR, CSPAN, and the Huffington Post.

Peter Loewen is Assistant Professor of Political Science at the University of Toronto-Mississauga. His current academic interests are political psychology and behavior, especially in Anglo-American democracies, behavioral economics, public opinion, genopolitics, and experimentation. He teaches in the fields of Canadian politics, political behavior, comparative politics, and experimentation. Loewen blogs occasionally at the Human Nature Group and A Shrewdness of Apes and lately has also been collaborating with Vote Compass, a democratic engagement tool. Additionally, he has begun some work with Participedia, a democratic engagement practices project.

Edmund Malesky is Associate Professor of Political Economy at Duke University. He has published in leading political science and economic journals, including the American Political Science Review and Journal of Politics, and has been awarded the Harvard Academy Fellowship and Gabriel Almond Award for best dissertation in comparative politics. Malesky serves as the lead researcher for the Vietnam Provincial Competitiveness Index and is a noted specialist in the political development in Vietnam and China, comparative political economy in Southeast Asia, as well as economic transitions in developing economies. Currently, Malesky's research agenda is at the intersection of Comparative and International Political Economy, falling into three major categories: 1) Authoritarian political institutions and their consequences; 2) The political influence of foreign direct investment and multinational corporations; and 3) Political institutions, private business development, and formalization.

Elin Naurin is Assistant Professor of Political Science at the University of Gothenburg. For the last two years she has served as a Marie Curie Fellow at the Center for the Study of Democratic Citizenship at McGill University, Montreal. Her research project is titled: "The importance of electoral democracy for the creation of welfare state politics in Sweden and Canada. To what extent can citizens actually change their everyday life through the formal processes of democratic representation?" Naurin's general research interests include democratic theory, comparative politics, voter and party behavior, public policy and constitutional theory. She published a book, Election Promises, Party Behaviour and Voter Perceptions (Palgrave Macmillan), in 2011

Brendan Nyhan is Assistant Professor of Government at Dartmouth College. His research, which focuses on political scandal and misperceptions about politics and health care, has been published or is forthcoming in journals including the American Journal of Political Science, British Journal of Political Science, Political Analysis, Political Behavior, Political Psychology, Pediatrics, Medical Care, Journal of Adolescent Health, and Social Networks. Brendan Nyhan served as a media critic for the Columbia Journalism Review, is a contributor to The Upshot, a New York Times politics/policy website that is currently in development, and regularly blogs and tweets. Finally, he co-authored a New York Times bestseller: All the President's Spin: George W. Bush, the Media, and the Truth (Touchstone, 2004).

Patrik Öhberg holds his PhD from the Department of Political Science, University of Gothenburg and works as a researcher connected to the Multidisciplinary Opinion and Research Group (MOD). Öhberg currently has a three-year International Postdoc stipend from the Swedish Research Council. He is placed at the National Election Chair at the Department of Political Science at Université de Montréal.  Öhberg´s research concerns the quality of representative democracy, political psychology, political career ambitions, and gender issues. In focus are perceptions’ of representatives from different levels of the democratic political system. In his dissertation Öhberg studied the role of individuals’ personal career ambitions among Swedish parliamentarians. He has also written books on Israeli history and Zionism.

Jessica Preece is an assistant professor of political science at Brigham Young University.  Her research focuses on the causes and consequences of candidate emergence and candidate selection.  Her recent article in Legislative Studies Quarterly advocates thinking about the role of the "selectoral connection" much more carefully.  She has special interest in gender and experiments, and has conducted gender and political engagement experiments in both the United States and Uganda.  She is the co-director of the new Gender and Civic Engagement Lab at BYU.

This conference is sponsored by the Yale Center for the Study of American Politics at ISPS.