A crowd gathered at the ISPS Policy Lab on the afternoon of December 1 to hear Brian Nosek speak about open science. Nosek, Professor of Psychology (Yale PhD, 2002), leader in the open science movement, Co-Founder and Director of the Center for Open Science , and director of the Reproducibility Project was visiting ISPS to talk about open science and research transparency, as part of the 2016 Yale Day of Data. 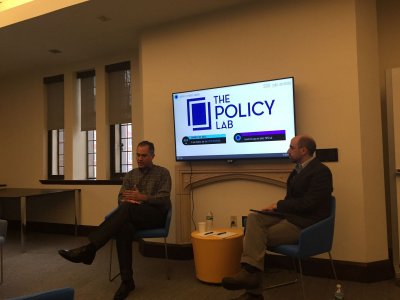 Graduate students, post docs, and faculty from across the social sciences had ample opportunity to ask questions and engage in dialog about open science and reproducible research. Allan Dafoe, Assistant Professor in Political Science at Yale and ISPS Faculty Fellow moderated the conversation. Dafoe is himself a champion of research transparency – he is the winner of the 2015 Leamer-Rosenthal Prizes for Open Social Science, awarded to early-career researchers who adopt transparent research practices or pioneer new methods to increase the rigor of research.

ISPS was a natural setting for this conversation, given its mission of facilitating interdisciplinary collaboration, its tradition of fostering high quality, policy-relevant research, and its practice of openness, transparency, and reproducibility, as evidenced by the ISPS Data Archive. As openness is a hot topic in science and in government, it was especially fitting for this conversation to take place at the new ISPS Policy Lab space. The Lab offers Yale students who wish to conduct data-intensive policy-related investigations a physical space and dynamic programming. Andrew Papachristos, Director of the Policy Lab, said in his welcome remarks, that while getting ready for its official launch early next year, the Lab has already hosted a number of well-attended talks, including this Day of Data event.

The ISPS event was scheduled between two other talks Brian Nosek gave at Yale. Earlier in the day Nosek spoke at the Department of Psychology about “Shifting incentives from getting it published to getting it right” (slides). In his talk, he argued for transparency in the research process, which includes open data, open access, and open workflow. Nosek reminisced about his time at Yale as a graduate student, and described his realization, informed by his intellectual interest in psychological biases, that the pressure to publish distorts the incentives of many researchers to do science the way it ought to be done: with values such as, communality (not secrecy), universalism (not particularism), disinterestedness (not self-interestedness), and quality (not quantity). Nosek discussed several incentives that could mitigate this problems, including badges, guidelines (e.g., TOP), and analysis and design registration reports.

The following day, December 2, Nosek delivered a keynote address on “Improving openness and reproducibility in scholarly communication” at the Yale Day of Data. That talk centered on the work of the Center for Open Science which aims to foster an environment that focuses on service delivery, not on access to content; provide free, open, public goods infrastructure; and align scholarly practices with scholarly values (slides; See Yale News coverage).