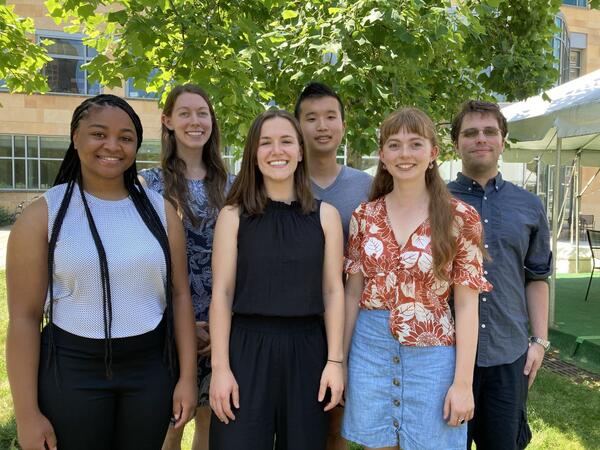 As the 2022-23 academic year begins, six fellows are joining the Institution for Social and Policy Studies (ISPS) for two new programs producing political science research aimed at answering questions critical to the functioning of our democracy.

“We are so pleased to welcome these exceptional scholars and students to our ISPS research community,” said ISPS Director Alan Gerber. “They each possess the curiosity, discipline, and drive to investigate questions crucial to understanding the nature of and threats to our democracy. And I look forward to helping them bring fresh insights to advance the scientific understanding of democratic representation and governance as well as addressing the current and emerging challenges we face.”

Schiff is an assistant professor in the Department of Political Science at Purdue University who will spend the year at Yale furthering her research at the intersection of technology, citizenship, and government. With her co-authors, Schiff has published a study finding evidence that certain public value failures associated with artificial intelligence have significant negative impacts on citizens’ evaluation of government. Another of her papers examines whether officer-involved shootings deter citizens from contacting government.

For ISPS’s Democratic Innovations program, Schiff is exploring whether citizen interests expressed to government through online communication, such as emails and tweets, result in the same level of representation and responsiveness as interests expressed offline, such as through letters or phone calls.  In partnership with bicycling advocacy groups, she is planning to investigate the effectiveness of online advocacy campaigns to improve cyclist and pedestrian safety in U.S. cities and towns.

Schiff received her Ph.D. and M.A. in political science from Emory University and completed a B.A. in public policy from Princeton University and an M.Ed. from Fordham University. Previously, she worked in K-12 education as a teacher and as a school administrator focused on curriculum design, assessment, and educational data use.

Pomirchy recently received his Ph.D. in politics from Princeton University, with concentrations in American Politics and Political Economy. His research focuses on accountability and representation in U.S. politics. For example, one of his papers analyzes intra-party factions in the U.S. Congress — such as the House Freedom Caucus and the Blue Dog Democrats — and argues that factions provide avenues for legislators to signal their ideological alignment to their constituencies. In another project, he assesses whether individuals have more coherent ideological preferences on issues they care about.

As an ISPS postdoctoral fellow, Pomirchy is investigating the degree to which elections can improve future representation at subnational levels. In particular, using a natural experiment in state legislatures where the electoral calendar is randomized across districts, he seeks to analyze whether districts select more competent incumbents at election time.

In addition, four pre-doctoral fellows are participating in a new partnership between ISPS’s Center for the Study of American Politics (CSAP) and the Tobin Center for Economic Policy.

Amelia Malpas earned a B.A. in politics and geography at Mount Holyoke College and will be working with Stanley B. Resor Professor of Political Science Jacob Hacker as her mentor on a research project about how local economic conditions — particularly the concentration of economic activity and Democratic voters in major metropolitan areas — affect elections and policy priorities of the two major political parties.

Ja’nae Jackson earned her B.S. in political science from Texas Christian University. She will be working with ISPS Resident Faculty Fellow Allison Harris as her mentor on a pair of projects, including one on the relationship between criminal trial judges’ colleagues’ characteristics and individual judge’s sentencing decisions. They will be seeking understand whether judges’ sentencing becomes more or less equitable as the judges gain colleagues who are different from them.

Sydney White earned her B.A. in political science from Swarthmore College and will be working under the mentorship of Dean Acheson Professor of Political Science and Global Affairs and Faculty of Arts and Sciences Dean of Social Science Kenneth Scheve. Their project will examine the consequences of economic concentration for the quality of democracy in the United States from 1870 to the present, in part tracing the effects of antitrust law.

John Cho earned his B.A. in government and quantitative social sciences from Dartmouth College. He will work with CSAP Director and Forst Family Professor of Political Science Gregory Huber and Sterling Professor of Political Science Alan Gerber on understanding the trajectory of political careers. This project will seek to answer questions such as who runs and doesn’t run for office in the contemporary United States and how do changes in the pool of people seeking office help to understand patterns of political polarization and elite conflict.