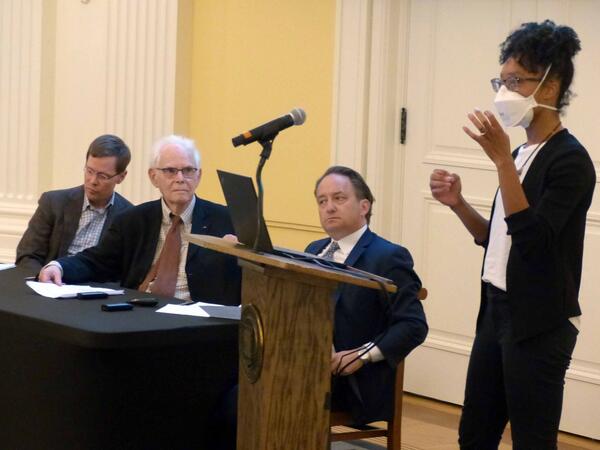 With the balance of power in Congress dependent on races too close to call Wednesday evening, three faculty fellows from Yale’s Institution for Social and Policy Studies (ISPS) offered their expert insight on the previous day’s federal midterm elections.

Speaking to students in the round Presidents’ Room of the refurbished Schwarzman Center, political scientists Allison Harris, Gregory Huber, and David Mayhew drew lessons from the past to help explain what the early results might mean for the present and near future. Yale College Dean Pericles Lewis, Douglas Tracy Smith Professor of Comparative Literature, led the discussion.

Mayhew, Sterling Professor of Political Science Emeritus, said he would not be surprised if the Republicans retake control of the House of Representatives. In all but two of the last 20 midterm elections from 1982 through 2020, the president’s party failed to win a majority of House seats.

“The party that wins the White House tends to overshoot, policy-wise,” Mayhew said, adding that this year was also peculiar because it was not just a referendum on President Joe Biden and the Democratic Party, but of the U.S. Supreme Court and its overturning of the federal right to abortion as well as the unusually prominent, persistent influence of a defeated former president. “It’s a tangle of stuff that was going on.”

Huber, the Forst Family Professor of Political Science and chair of the department, presented a statistical model based on historical and contemporary economic factors and presidential popularity that predicted Democrats should have lost as many as 38 seats in the House this year and not what appeared to be somewhere between nine and 11. While the final tally remained unclear Friday, the Democratic Congressional candidates vastly overperformed many predictions of a Republican “red wave” across the country.

In response to questions about causes underlying the Democratic overperformance, Huber cautioned against reading too much into exit polls, which he said have become unreliable as too many people decline to speak to pollsters. He said that researchers will need to dig into the data to tease apart the many influences on the different election outcomes in different races, citing work by new ISPS Resident Faculty Fellow Shiro Kuriwaki on voters who cast ballots for candidates in more than one party.

“It’s not just all about partisanship,” Huber said.

Harris discussed the importance of down-ballot races for prosecutors, judges, and sheriffs on issues such as the use of cash bail, decisions about which crimes are emphasized by law enforcement, and local cooperation with federal immigration officials. She noted that big-name candidates at the top of a ticket can boost turnout in midterm elections and influence local races, citing the influence of Texas gubernatorial candidate Beto O’Rourke’s 2018 campaign on races for judgeships in Houston’s Harris County.

In response to a student’s question, Harris also noted that generational cohorts tend to become more Republican over time but that the current generation of newly eligible voters has leaned more Democratic than previous generations of young people. And she predicted that the issue of gun control will continue to drive political behavior, because voters who support stricter gun laws also tend to support a bundle of progressive issues involving crime and punishment, such as reducing the amount of policing in communities.

Huber said he was not sure what a divided Congress might portend for the next two years, but that it could involve more brinksmanship over government shutdowns and default on the national debt. He also predicted that a narrow Republican House majority would have difficulty reaching compromises within their own caucus and the Democrats to address divisive issues such as entitlement reform and the budget deficit.

“If you’re a political scientist, it’s exciting,” Huber said. “It’s just, we’ve had a lot of stressful politics. And I don’t see it going away.” 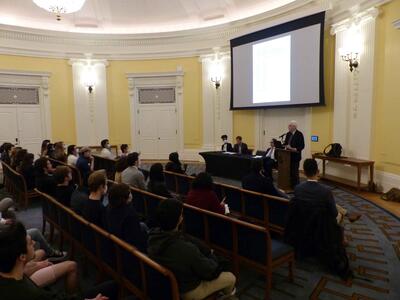