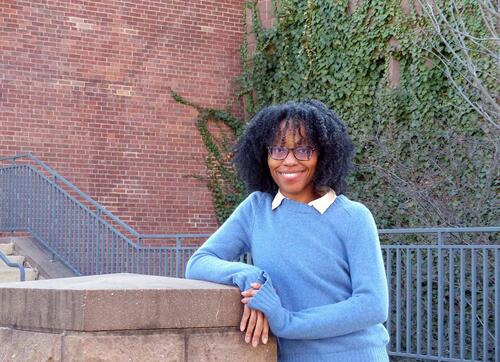 In 2006, Samuel Sommers, currently chair of the Psychology Department at Tufts University, published a study finding that White participants on mock juries composed of racially diverse members were more likely than White participants on all-White juries to show leniency to a Black defendant — even before the jury engaged in any discussion.

This finding stuck with Allison Harris, leading her to wonder how diversity might influence other, real-world aspects of criminal justice. In a recent study of her own, she found that as the percentage of Black judges in a courthouse increases, white judges are less likely to render incarceration sentences in cases with Black defendants.

“What I think now is, overall, when you change people’s environment, it changes how they think and how they behave,” Harris said. “It can be the same in a courthouse as in any environment or workplace. When the composition of your colleagues changes, it changes how individuals interact with people and go about their work. In law enforcement and the justice system, this influence can have substantial consequences for people’s lives.”

Harris, an assistant professor of political science and a resident faculty fellow at the Institution of Social and Policy Studies (ISPS), seeks the source of such consequences throughout her work, conducting research in American politics with a specialization in law and courts and the ways in which institutional change affects disparities in institutional outcomes.

We recently spoke with Harris about how her work helps to explain race, politics, and the criminal justice system.

ISPS: With regard to your finding about the racial makeup of courthouses and the influence on incarceration sentences, what might be driving this effect?

Allison Harris: Future research is needed to tease out the specific mechanisms at play, but we can make some guesses. There’s a warm and fuzzy answer where someone realizes they work around people who are different from them and learns to think differently and changes their behavior. There is a less charitable interpretation where a judge simply does not want to be seen as someone whose behavior is discriminatory. Or maybe it’s because criminal judges who see more peers who look like a majority of defendants in their courtroom become more aware of how race affects their judgments.

ISPS: Is the precise mechanism important? It seems like whatever is going on, diversity among the judiciary serves a greater good.

AH: I think the mechanism is important. But even if we don’t know precisely what is behind this effect, the result is important. It shows how, if we don’t measure diversity in this way — as a group-level characteristic — we are missing some of the ways it can impact behaviors or individuals in a group.

ISPS: What do you mean by that?

AH: I would like to see people — and particularly scholars — move away from thinking about the effect of identity-based diversity as just the behavior of individuals who don’t fit the mold of an accepted norm. Instead, we can think about and study this issue more holistically and accurately. As the saying goes, the whole is more than the sum of its parts. In my work with judges, I’m thinking about what it means for the whole court to become more racially diverse. If we only incorrectly think about the effect of racial diversity as the extent to which non-white people’s behavior differs from white people’s — which is the way many often think about it —then we are falsely accepting white people’s behavior as a baseline or norm.

We are also mismeasuring. An individual cannot be diverse. If we don’t see diversity as a group-level characteristic, we are missing important ways it can affect people’s behavior and the systems in which they interact. It is the composition and holistic interaction of the community of coworkers that matters. A more diverse workplace influences behavior and outcomes in ways that go beyond any individual’s background or identity or any individual’s behavior.

ISPS: You have studied the effect of federal judges’ criminal defense experience on sentencing (finding they are, on average less likely to give out extremely long sentences). You have studied how the backgrounds of women of color nominated to the federal judiciary compare with those of other appointees (finding that, compared to white male judges, women of color judges accrue more types of professional experience before their appointments, are more likely to have had prior experience as a judge, and are generally nominated earlier in their careers). How should these and similar findings guide decisions about who to appoint to federal judgeships? How do you think the lifetime tenure of federal judges influence this dynamic?

AH: I think overall, representation is a good thing. I think we’re better served by less homogeneous institutions for a variety of reasons. Even if it’s just having more types of experiences and points of view related to those experiences in our various institutions, that’s a good thing. For example, if we see judges who were former public defenders making very different decisions than former prosecutors, that’s telling us something important. Different experiences are informing how they see their work. And the lifetime tenure of federal judges has a huge impact on the capacity for change. If what people want is a more diverse, more representative judiciary, and for decades that didn’t exist, it takes a longer time to see the impact of newer appointments reflected throughout the entire judiciary.

ISPS: In a review of political science literature on judicial decision-making, you and your co-author found that characteristics such as race, ethnicity, and gender can sometimes predict judicial decision-making in limited kinds of cases but also that these characteristics of identity are by far less important in shaping or predicting outcomes than is ideology or partisanship. You also note that ideology and partisanship closely correlate with gender, race, and ethnicity. How do you tease apart these influences? Is it important to do so? Aren’t we all a product of our backgrounds and ideological makeups?

AH: Ideology is closely correlated with these characteristics we might care about, and the literature suggests that we can tease apart these influences in cases where race and gender are salient, such as those involving voting rights and sexual harassment. But it’s not entirely clear whether, for example, Black judges make different decisions than white judges in the criminal legal system. One argument is that in this arena, any one judge’s identity isn’t going to be a deciding factor. There is a question of power dynamics in these institutions more broadly. This is one reason that I conclude, in my own work and in coauthored work, that scholars really need to consider the composition of the judiciary as a whole and on multiple dimensions when considering the role that various identities play in court outcomes.

ISPS: This sounds like another argument for looking at this issue more holistically.

AH: Right. Let’s consider studies of diversity among economists. Many of these studies produce findings in favor of diversity. But when it comes to identity-based diversity, some of these studies are often framed around how individuals from different backgrounds and experiences bring different sets of tools to the table. So that when you diversify the bundle of tools in a work environment, you are more adept at solving the problem at hand. This perspective is less about identity-based diversity per se than skill acquisition. To me, that misses an important piece of the puzzle when we think about identity and diversity with respect to race and gender. Diversity in a workplace offers more than a wider variety of tools to accomplish business goals. Diversity changes the context in which the entire group works, which impacts the group and the people they serve or whose fates they control. In addition, relative power in society varies with individuals’ identities. If one group has always held a position of power in the judiciary, for example, it might be difficult for one judge, who isn’t a member of the group in power, to suddenly start behaving differently than colleagues. It is hard for one judge to make a discernible difference. And in fact, maybe change shouldn’t be up to any one judge.

ISPS: How did you become interested in this subject?

AH: When working on a plan for my dissertation, a friend suggested I look at some data from Illinois courts after the state changed districting rules to help elect more Black judges and Republican judges in Cook County. It was unclear whether this districting change made the court more diverse. And I thought, why? Why would it be important to make this court more diverse? There has also been a lot of talk and employee training in business and at schools about diversity, equity, and inclusion. I found the answers offered in these types of trainings unsatisfying. I also thought there might be an answer beyond just increasing descriptive representation. And if there is, these data offered an opportunity to look in a place where the stakes are really high. People’s freedom is at stake here.

ISPS: With Dara Strolovitch, you direct the ISPS Center for the Study of Inequality (CSI), which held a conference last summer on crime and punishment. What are your hopes for this center? What are you trying to accomplish?

AH: Dara and I are really excited. We want to create a space for students looking to work and collaborate in all areas of inequality. Like many of ISPS’s programs and centers, CSI provides an opportunity for individuals working on a shared subject to learn from each other. There are other places someone who studies inequality might go for a talk but nowhere that brings it all together. At our center, the field of study doesn’t have to be just political science. It could be economics and sociology, African American studies, gender studies — anything that addresses inequality. We are creating an interdisciplinary community of scholars focused on addressing this issue.

AH: My answer to both is: democracy. The laws in most states allow individuals to vote after they have completed portions of their sentences. Most people don’t vote because they don’t realize they are eligible. And despite expectations, most people in our study didn’t turn out to be overwhelmingly Democratic registrants. We found party affiliation among eligible voters with criminal records evenly split. Republican fears that making it easier for this population to vote would sway elections to Democratic candidates aren’t well founded. Like any population, it’s a population worth understanding better. People deserve the ability to exercise their right to vote.

ISPS: How can social science lead to better policies? Can research improve the level of political discourse?

AH: I hope so! One thing I think that is good to see is more people working with nonprofits, NGOs, and community-based organizations. We are partnering with them and sharing skills we have, such as research design. We can help these organizations work in a different way and access more data to inform policy decisions. As researchers, we can influence the process in a way that is not partisan and improve the way government works.